Giving Thanks: There Are No 'What Ifs'

on November 19, 2012
The other night while I was observing my 6-year-old, who has Down Syndrome, taking note of his heart-melting smile, his contagious laugh, and his beautiful milky white facial features, I began to feel the all-too-familiar twinge of self-pity stirring up inside my heart. Again? But, this time things were different. This time, my reaction was different. This time, my recurring thoughts about the 'what ifs' and 'what he may have been like as a typical little boy' passed through my mind faster than a wayward streaker at a college football game.

Immediately, my mind found peace, a solace from outside myself, and one I can only describe as God-given.

For years I've struggled through imagining what Blake would be like if he could walk faster, if he didn't battle with chronic constipation, if he could speak and be better understood, if he could stand up for himself, if he could identify all of his ABCs and write his own name like his 4-year-old sister, if he could potty train, if he could hang with his brother's friends just like their typical siblings...

And, for years, I've allowed myself to grieve the little boy who never was. The boy I wished I'd had. Another son who would grow up, carry on the family name, marry, have babies, invite me to his home, and drive me around in his car.

I had always counted these imaginary things as loss. Yet, all this time, I was looking at his life in comparison to a child who was never meant to be. Some random little boy who has never existed and who never will. For lack of a better term, I'll call this one of my "voila!" moments.

"The Blake you see is the only Blake there ever was. The only Blake that will ever be. There was never a typical Blake. He was not meant to be anyone else. You never lost a typical version of him because the version you see is the version I made. Perfectly. Every fiber of every cell, every chromosome, including that extra one, that I gave him is supposed to be there. I knit him together inside your womb just as I knit the others. Just as I knit you. The Blake you see is mine, and I placed him in your life, into your family's life for a multitude of reasons. I am your God, and you are my child. Accept this gift for who he is, the way his is. Don't wish for a different gift or different colored wrapping paper or a bigger bow. Love him because you're his steward. I have entrusted him to you just the way he is."

And, just like that, I found myself slightly dumbfounded yet quite relieved. I know, as a human, there will be future moments during which I will grieve for the imaginary typical son I never had, but I'm imagining the "streaking" thoughts running across the field of my mind going at a faster and faster clip until at last they are no more.

Accepting Blake during this Thanksgiving season has been the sweet, unexpected icing on my gratitude cake. Sure, I've always been thankful for his bear hugs and his laid back personality. But, now I can be thankful for the extra chromosome, for the traits that tax my patience, and for the fact that God made him just the way he should be. 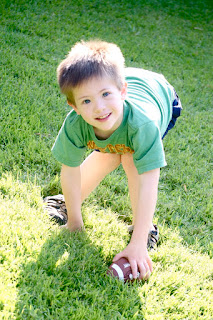 Note: It is my theological conviction that God does not outright speak to us things that are contradictory to his Scripture; ergo, I do believe the Holy Spirit impresses upon us truths that are in line with Scripture (as in the case of my thoughts about Blake—See Psalm 139). God did not speak audibly to me as He did to Abraham or Moses, but I know, as His child, if I test these thoughts against His word, He will let me know when He nudges, when He convicts, when He chastens, and when He comforts.

So, I've been wanting chalkboard paint for a LONG while so that I could paint the top of my children's terribly marked up wooden IKEA table; however, I kept putting it off looking for something NON-TOXIC. Finally, I happened upon some at Target today (though I'd seen it before at Wal-Mart but ignored it because I was way too busy, too tired, and too... well, tired). So, I bought it! Today. Came home. No time to paint. Gotta pick up kids at carpool. Back from carpool I couldn't decide whether or not I wanted to paint over the laminate cabinet side or start with something less "main floor" such as my daughter's bookcase. So, the chalkboard paint went up and down the stairs with me several times, opened, closed... sigh. Finally, when I settled on the old Nike "Just Do It" slogan, I began to draw a template of a frame so that my chalkboard, when painted, would be nice and straight. I decided to use a piece of... you guessed it, CHALK. Well,

The game red light, green light is an old favorite that seems to have endured the test of time.  And, yet, I have recently found that there's quite a newer, updated "Parenting" version I'd like to share with you.  Perhaps some of you moms and dads out there have played this before. RULES:  May change from day to day. RED LIGHT = A Parent's Direction to STOP doing something, including but not limited to: annoying a sibling verbally or physically making loud, "nails on chalkboard" noises with your vocal chords jumping on the furniture or bed taunting the dog (or cat) throwing toys or other undesirable objects GREEN LIGHT = See below. HOW TO PLAY: Parent gives Child "A" a RED LIGHT.  Child "B" gives self a GREEN LIGHT to take action similar to Child "A" prior to #1 in hopes of a different outcome. Parent gives Child "B" a RED LIGHT. Child "C" reinstates GREEN LIGHT to take action similar t

No Pressure, and Mama's TIREd

One of the most daunting, annoying things to see in a woman's life is that little yellow "TIRE PRESSURE LOW" light flashing on your car's display. This morning in South Florida, the temps had dropped 30 degrees from the usual, so tires everywhere were calling in "sick". "I don't have enough air." " I'm feeling low." "There's not enough pressure in my life." Wah wah wah. So, the fear instilled by the tires that be forced its way into the already-busy schedule, causing good people everywhere to pull over and find some air. Simple enough, right? Mmmm hmmm. In this life, one of my biggest nemesis... nemesises? nemeses? nemesi...whatever... is  this  thing right here... an inanimate object, but an enemy to the most intelligent among us: If you can find one, great. If it doesn't have an "out of service" sign taped to the front of it, even better! This one actually had a twin, so I was hopeful that on