Below is an article I wrote mostly for myself in January 2006. At the time, I was 3 months pregnant with our son, Blake, who was, in fact, born with Down Syndrome. There he is to the right of your screen, on skis! Such a sweet boy.

Anyway... I've certainly had my share of emotional ups and downs through this entire journey. The struggles are not nearly as bad as I thought they would be, but at times, I find myself wishing that he was typical for his sake. YET, as you can see, he surprises us all sometimes and actually fared better at skiing than his sister who's just 22 months younger.

At any rate, I'm posting the article below because Noah's Dad posted 25 gorgeous pictures (each worth 1,000 words) of his son Noah, who has Down Syndrome HERE, and he asked those of us who follow his Facebook posts to share our thoughts about this article titled, "25,000 Reasons Not to Worry About The Results of a Down Syndrome Screening Test."

As you read my article/screening experience,  I'd like to encourage those who may be at a similar stage to remember two things:

1. God does not make mistakes. He may make a decision for you that is way different than what you would like or think you need, but it's perfect.

2. Your child may/may not have DS when they are born. My OBGYN told me, prior to Blake's birth, that he had delivered a child with DS who showed no soft signs on the sono and one typical child who showed all the signs on the sono. So, there are no guarantees, but again, I refer you back to #1. :)

To give you just a tiny bit of background, we had a 7 month old son at home at the time I wrote this article in 1996. YEP! They're 13 months apart... Irish twins. ;) I tell you this upfront lest you become confused towards the end of the article. You'll see what I mean. So, without further ado, I give you an "oldie, but goodie."

First Trimester Screening
(personal ponderings - January 2006)
Fetal Nuchal Translucency.  I’ll never forget these three words.  They were used to describe the excess fluid on the back of my 11 week-old unborn baby’s neck.   The results were “positive.”  According to the measurements, our unborn child may or may not have chromosomal issues, cardiac problems or genetic abnormalities.  One way to tell for sure would be to have an amniocentesis performed, but that carried with it a slight risk for miscarriage.  Admittedly and ashamedly, I thought about this and allowed myself, for a nanosecond, to ponder the prospect of miscarrying an abnormal child.  Relief?  NOT.  This was not the answer.  Now, I had another reason NOT to go through with the amnio.  I had to keep my motives pure.  And, what if the baby was perfect?  What if the amnio showed absolutely nothing wrong and I miscarried anyway?  Human life is precious, and I was not going to mess with it.  Namely, I was not going to mess with God.  I decided, along with my husband, that God was in control of the situation and that He would bless us with a healthy child or He would bless us with a special needs child.  Either way this would be a blessing.  Either way we would find some sort of joy in the tiny little fingers and the sweet, new little scrunchy face.

Selfishly, I could not become overly excited about the pregnancy.   I am a Type A person.  I need to know.  Is it ok?  Is it not?  Is it a boy?  Is it a girl?  Do I move my son to the room with the smaller closet and paint his old one pink or do I buy another set of airplane sheets?  All is up in the air. All is in the balance.  All is at the “mercy” of machines and doctors’ diagnoses.  Today, my OB could not detect a heartbeat with his Doppler machine.  Though not overly concerned, he sent me next door for an ultrasound anyway.  Mixed emotions and horrible, shameful thoughts again flooded my mind.  Perhaps the baby had quietly passed on, and we would “simply” try again.  Yet, there he/she was alive and well.  The tiny little blip of a heartbeat, blinking at me as if to say “hello.”  I watched as the technician took measurements, and though she spoke not a word to me, I’m smart enough to figure out that “NT” stands for Nuchal Translucency, and I was discouraged to see that it was still the same measurement as a few weeks ago.

I’m not sure if my skewed perception of children with Down Syndrome is stereotypical or not, but whenever I see a child with Downs my heart melts.  I think, mostly out of pity and sadness for the child and the parents.  But, there’s also something so sweet about each of these children, a sort of hidden innocence, perhaps, dare I say, ignorance that lends them to be much more desirable to be around than the average human being.  They sometimes have an unconditional way about them.  They don’t tend to discriminate like we do or care that they are not wearing the latest fashions.  They appear to be content with the simpler things in life and not bogged down by the worries of the world.  Maybe that’s part of the “melting” I experience, and yet I quickly shoot up a prayer, each and every time, “God, please don’t let my baby have Downs.”

Myself, I had a sister who died at the age of 2.  She was born with Downs.  I never knew her.  She had an enlarged heart at birth; she could never walk, and the only word she ever knew was “Daddy,” which she reportedly said over and over and over.  My dad ate it up.  She was a Daddy’s girl just like me.  Eventually, her life was cut short when her body succumbed to double pneumonia.  Funny thing is… I spent a lot of my childhood being jealous of her, even in her death.  My parents had a picture of her on the wall with the words “she is just away” typed at the bottom.  They also referred to their only blonde-haired, blue-eyed child as their “little angel.”  Now that I’m older, my heart aches for my parents, who are now deceased.  I cannot imagine losing a little girl so precious to them.  The fact that she had Downs did not seem to phase their love for her at all.  Why should it?  And, why would I even begin to think that my love for my own unborn child should be any less?

Well, now, the “why me” attitude has come to visit, and I must investigate this further.  After coming home and playing with my “whole” and healthy baby boy of 7 months, I began to wander onto the internet to research Down Syndrome babies.  My findings were surprising.  What I saw on the National Down Syndrome Society (NDSS.org) site were not a bunch of sad pictures of abnormal looking children sitting in chairs, slumped over, staring at the floor, but rather picture after picture of some of the sweetest faces on earth… boys and girls, laughing and smiling.  Some hugged on siblings who obviously did not have Downs but displayed a look of pride in their eyes as if to say “this is my sibling, and I love them very much no matter what.”  Some played in the park, some ran races, others exhibited and even exuded emotions of love right there on the screen!  I’m almost ashamed (ok, I am ashamed) to admit that I expected worse.  I have friends with Downs children, and they are so kind and fun and loving.  Yet, the connotations associated with this condition continue to haunt me.
In the end, I was surprised and encouraged.  I suddenly realized that this little life inside my tummy was not just a “below average” individual, and I could not write him/her off as just an “oh, well.”  Sure, he/she may have some form of cognitive dysfunction in addition to some physical challenges.  Prayerfully, this will not be the case at all, but if it is, this little ray of sunshine will surely break through our dim circumstances and warm our hearts forever.  Let the melting begin! 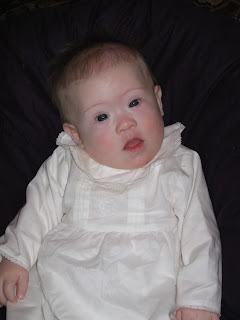 When Blake was born, I thought he was one of the most beautiful babies I had ever seen. He was soft and squishy and just melted into your arms (due to low muscle tone).

He was so sweet and laid back. I never imagined it would be harder to wake your baby for feedings than to have them wake you! Ha! Above is one of my favorite pictures of him in his baptism gown (circa 7 mos. old). 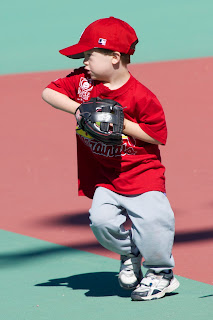 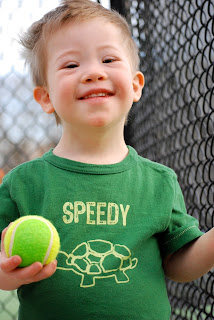 Blake is beginning to learn to play tennis, and he is his brother's biggest fan when he's out on the field playing baseball!


Likewise, Blake, who plays baseball in The Miracle League, is on the receiving end of that relationship when it's his turn to be up to bat.

He even hit one out of the air!

We're so proud of him!

Blessings to you on your journey!

It's All About The Light

Mornings. Need I say more? As a self-proclaimed night owl, I disdain the A.M. greetings, the yawns, the blurry-eyed shuffling about. The only thing that makes mornings worthwhile is... well, coffee, of course! You didn't see that coming, did you? All grumpiness aside, I've somewhat made peace with mornings over this last month. Somewhat. Forced by the early birds that be to take my children to school at the crack of dawn, I have come to actually enjoy all of the gorgeous cloud formations that fill the morning skies here in the Southeastern United States. Photo by  Jordan Whitt  on  Unsplash Hues of lavender purple, periwinkle blue, apricot orange, and buttery yellow fill the sky with the majesty of the Almighty Creator. Though there are many Divine attributes of God to worship and adore, it's His infinite creativity that never ceases to take me by surprise over and over again. Even on morning drives. Photo by  Rachel Lynette French  on  Unsplash

Writer's block.  Sounds like a cool place where a bunch of writers might live close together in one small square of land and exchange fabulous ideas around the clock while sipping giant cups of java and telling tall tales (while their children are all behaving perfectly in the background, of course).  Not so.  Just an intangible inability to come up with something earth-shattering for one's formerly-engrossed readers to peruse.   But, I digress (I love that phrase).  I was thinking today about... well... about... ummm... are there any men around?... Looking left... Looking right... I was thinking about..... breast pads Yes, you heard right.  Why ever, in a million years, would a person who is wayyyyyy past that stage of life even ponder the idea?  Well, I'll tell you.  A dear, sweet friend of mine, who shall remain nameless unless she'd like to comment on the matter ex-post-facto, was telling me a tale of a mommy trying to use the bathroom one day.  And, of course, w